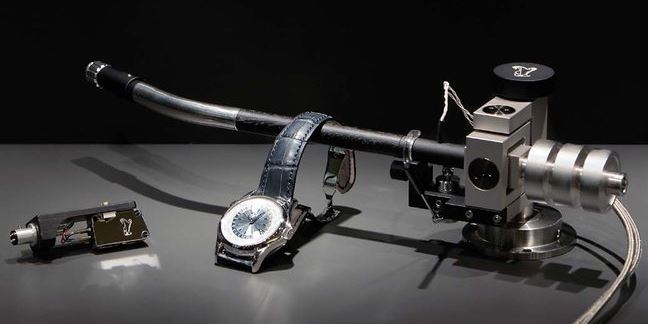 DaVinci’s innovative new tonearm, the Master’s Reference Virtu is something unique and very special! Peter Brem has developed an entirely new four-point, gimbaled, magnetic-sapphire bearing that is said to have almost zero friction. Also new is the provision for azimuth adjustment and a much-easier-to-use VTA dial with scale. (Exchangeable arm tubes—for best cartridge-matching—will also be offered soon.) When DaVinci announced the Virtu JV was skeptical, since one of the signal advantages of the Grandezza tonearm was its simplicity and the absence of adjustable (and hence resonant) parts. Clearly his skepticism was misplaced because the new arm is greatly superior in every way to the Grandezza (and to every other pivoted ’arm JV has heard). The bass especially is much deeper, better defined, and more powerful—at least on a par with that of the Walker Mk III—and the sense of air and space around and between instruments and the sheer breadth of its soundstage are stunning. Overall, the best pivoted tonearm JV has had in his system, and (unquestionably) his reference.

Available for auditioning at My Kind of Music, Toronto.