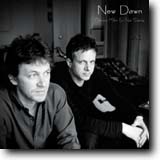 New Dawn is a seamless tapestry of superb guitar skills from Neil Stacey and Dominic Miller, who have written all twelve tracks featuring original music for two guitars.

Dominic has played guitar with Sting’s band for 18 years and Sting has co-written two of the tracks.

New Dawn is light and melodic, beautiful and reflective.

This is music not to be missed! Neil and Dominic played Pizza Express in July. It was originally to have been two dates, but such was the demand for tickets to see them, that an additional three dates had to be booked including two on a Saturday night!