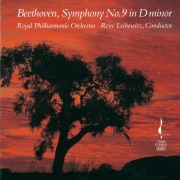 Richard Wagner wrote that Beethoven’s Ninth Symphony was the redemption of music into drama. Claude Debussy said that it was amazing that the work had not been buried under the mass of prose it had provoked. While it is true that the work has been criticized by some for its choral finale, it is revered by many, admired by more, and held in awe by almost all. It is one of the greatest achievements of Western Music.