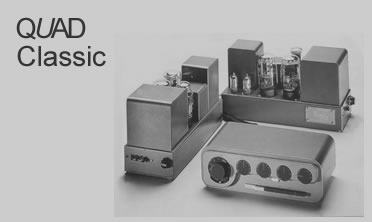 The history of Quad is one of technical achievement in the field of sound reproduction. It is a story that began with the Quad 1 amplifier which brought the benefits of 15 years and experience in professional audio and industrial products to the task of making the most accurate domestic audio amplifier of it’s age.

A few years later, the product which set the standard for amplifiers was the Quad II Power Amplifier that was introduced in 1953, the year of Queen Elizabeth’s Coronation and the year in which Mount Everest was finally conquered. This amplifier pioneered the principal of cathode coupling through the output transformer to reduce harmonic distortion to almost negligible levels. Such was it’s clear superiority that this model remained in production for 18 years.

Three years later in 1956, Quad demonstrated the first true full-range electrostatic speaker. This remarkable product (know later as the ESL-57) used a virtually mass-less plastic film as a moving diaphragm between two charged plates. Compared to the loudspeakers of the time, the ESL free of unwanted colourations and distortions. This landmark product remained in production, virtually unchanged, for 28 years.

Available through My Kind of Music; for more information visit the manufacturer’s site: http://www.quad-musik.de