MØRCH has introduced a new top model: The DP-8 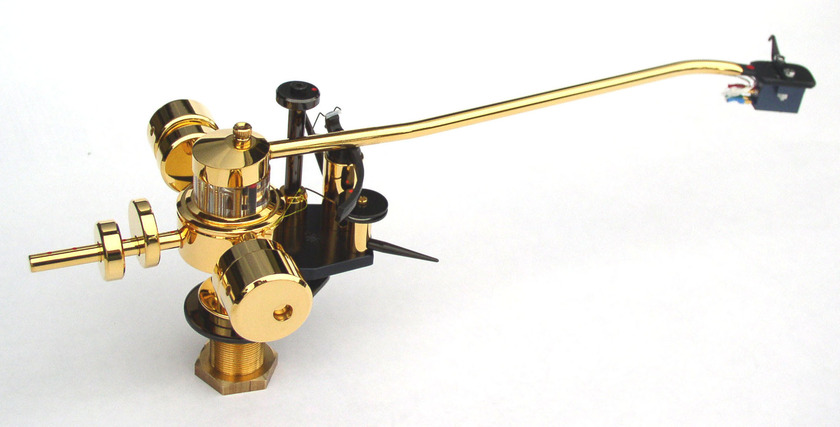 On the 4th of July 1981, Hans Henrik Mørch sent out a new tonearm to be auditioned. It was a prototype, a UP-4 modified to have greatly improved deep bass performance. But at that time audio equipment was not very concerned with the deep bass reproduction of vinyl records – the auditioners did not hear much improvement, and the project was abandoned. Somewhat ironically the introduction of digital audio helped advance the quality of deep bass – for instance, sub-woofers are now commonplace. After 25 years the old prototype was dusted off and eventually became the DP-8. The improvements in deep bass and dynamics are now evident…

Model DP-8 Anisotropic has a unique combination of bearings: For the horizontal mode of motion a silicone damped, high precision ball-bearing assembly with large housing for substantial damping.

Two precision sapphire bearings are incorporated for the vertical mode of motion. This also may be damped, if desired, by injecting silicone fluid into a well for vertical damping. Vertical damping is rarely needed for this model. It is independent of the damping of the horizontal mode of motion, and further it can be adjusted to all intermediate levels of damping.

Model DP-8 Anisotropic has a device for adjusting the VTA while playing integrated. Markings for “getting back” to a special setting is provided.

The large effective mass for the horizontal mode of motion is stabilizing the the arm tube horizontally, so that at very low frequencies it is only the cantilever of the cartridge, that is moving – not the tonearm. This means that the bass goes all the way down reproducing all the bass on the record with full amplitude and dynamics.
The DP-8 got the Golden Ear Award in The Absolute Sound June/July issue 2010. In the article, the author refers to the DP-8 as “anisotropic”, which is a short technical way of characterizing the new features.